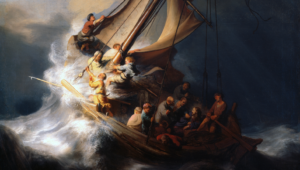 Christ in the Storm on the Sea of Galilee -Rembrandt

On that day, when evening had come, he said to them,
“Let us go across to the other side.”
And leaving the crowd behind,
they took him with them in the boat,
just as he was. Other boats were with him.
A great windstorm arose, and the waves beat into the boat,
so that the boat was already being swamped.
But he was in the stern, asleep on the cushion;
and they woke him up and said to him,
“Teacher, do you not care that we are perishing?”
He woke up and rebuked the wind, and said to the sea,
“Peace! Be still!”
Then the wind ceased, and there was a dead calm.
He said to them, “Why are you afraid? Have you still no faith?”
And they were filled with great awe and said to one another,
“Who then is this, that even the wind and the sea obey him?”

Jesus rebuked the wind and the sea,
strictly to open the eyes of the apostles.
Maybe that was the real miracle here.
Have you ever asked God to have your eyes opened?
What has God done in your life,
to make you aware of His power, and His love for you?