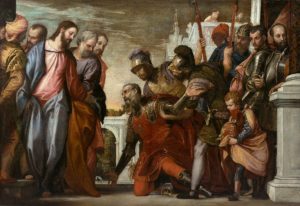 “The Faith of the Centurion”

After Jesus had finished all his sayings in the hearing of the people,
he entered Capernaum. A centurion there had a slave whom he valued highly,
and who was ill and close to death.
When he heard about Jesus, he sent some Jewish elders to him,
asking him to come and heal his slave.
When they came to Jesus, they appealed to him earnestly, saying,
“He is worthy of having you do this for him,
for he loves our people, and it is he who built our synagogue for us.”
And Jesus went with them, but when he was not far from the house,
the centurion sent friends to say to him, “Lord, do not trouble yourself,
for I am not worthy to have you come under my roof;
therefore I did not presume to come to you.
But only speak the word, and let my servant be healed.
For I also am a man set under authority, with soldiers under me;
and I say to one, “Go,’ and he goes, and to another, “Come,’ and he comes,
and to my slave, “Do this,’ and the slave does it.”
When Jesus heard this he was amazed at him,
and turning to the crowd that followed him, he said,
“I tell you, not even in Israel have I found such faith.”
When those who had been sent returned to the house,
they found the slave in good health.

Consider this: Jesus is being of service, “doing a favor” if you will,
for a Roman centurion whom He has never met.
The centurion is asking not so much for himself,
but for the health of a slave, whom Jesus also has never met.
Then the centurion, a man of authority, humbles himself in faith,
and asks Jesus to just speak the word of healing,
because the centurion knows that the authority of Jesus comes from God,
and is the highest authority of all.
Remember this miracle today when you pray,
and include someone who needs healing, someone you have never met.
Even without a name or a location,
let your faith assure you that God can heal that person, only because you asked.