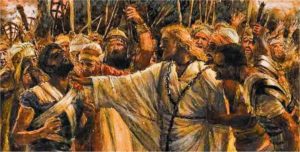 When he got up from prayer, He came to the disciples
and found them sleeping because of grief,
and He said to them, “Why are you sleeping?
Get up and pray that you may not come into the time of trial.”
While he was still speaking, suddenly a crowd came,
and the one called Judas, one of the twelve, was leading them.
He approached Jesus to kiss him; but Jesus said to him,
“Judas, is it with a kiss that you are betraying the Son of Man?”
When those who were around him saw what was coming,
they asked, “Lord, should we strike with the sword?”
Then one of them struck the slave of the high priest
and cut off his right ear. But Jesus said, “No more of this!”
And he touched his ear and healed him. Then Jesus said to the chief priests,
the officers of the temple police, and the elders who had come for him,
“Have you come out with swords and clubs as if I were a bandit?
When I was with you day after day in the temple, you did not lay hands on me.
But this is your hour, and the power of darkness!”
Then they seized him and led him away,
bringing him into the high priest’s house.
But Peter was following at a distance.

Even when Jesus seems agitated,
and perhaps angered by the violence occurring before him,
it is his compassion that guides his actions. What a lesson for us!
If he were asked about it later, how powerful would the testimony
of the slave of the high priest be to any who heard it?
Would it move you deeply?