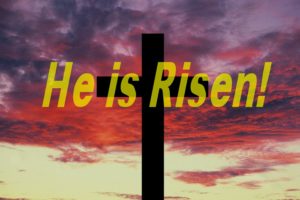 Because God loves us so much, He has given us freewill,
the ability to choose between right from wrong.
God already knows that while we could choose His path,
some of us will choose otherwise and sin against Him.
The pain of a loving parent, who watches a child make a bad decision,
or a series of them, may be the only comparison our earthly experience can offer.
Of course the parent still loves the child as much as before,
but the errant child will be somewhat out of favor with the parent until that child repents.
It is the same with God. He still loves us so very much,
but realizes we cannot repent for all we have done.
God does not like the void that has come between Him and His children,
and offers a sacrifice for our sins.
God offers the life and death of His son Jesus,
as the sacrificial lamb, to atone for our sins.
Yet even God cannot assign this task; Christ has the same freewill that we do.
Jesus had to be willing to do this;
He had to choose to submit to the will of God, and He did so out of love.
We have been given a gift.
Because of Christ Jesus,
we have the ability to step beyond that void between God and us,
and dwell in His Grace.
All we have to do is accept this gift of forgiveness,
from Christ, as a result of the Resurrection.
We have been given another gift as well.
Beyond forgiveness, we have been given the opportunity
to serve this loving and Holy God, just as Christ did.
To that end, it is the hope and prayer of all at Mt Healthy United Methodist Church,
that the past forty days of prayer and meditation have been influenced by the Holy Spirit,
and have brought you closer to God.