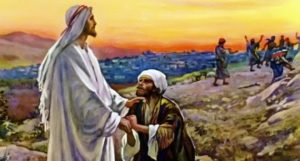 On the way to Jerusalem Jesus was going
through the region between Samaria and Galilee.
As he entered a village, ten lepers approached him.
Keeping their distance,
they called out, saying, “Jesus, Master, have mercy on us!”
When he saw them, he said to them,
“Go and show yourselves to the priests.”
And as they went, they were made clean.
Then one of them, when he saw that he was healed,
turned back, praising God with a loud voice.
He prostrated himself at Jesus’ feet and thanked him.
And he was a Samaritan.
Then Jesus asked, “Were not ten made clean?
But the other nine, where are they?
Was none of them found to return and give praise to God
except this foreigner?”
Then he said to him, “Get up and go on your way;
your faith has made you well.”

Is real faith as rare as one in ten? Is it perhaps even more rare?
Doesn’t faith seem to be an even more beautiful homage to God when it is this rare?
How strong is your faith? Today let your faith speak to God in your prayers.